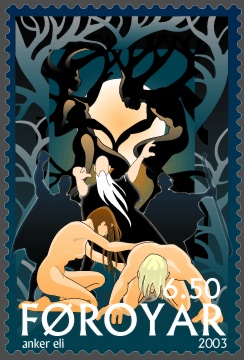 Johnny and Joey fought each other in the ruins of the fort, oblivious to the devastation  around them.  Circling each other, hunched over with fists up, panting, it looked as if they had been fighting all their lives, as if fighting was as natural as walking and talking.  Wearing big boots, snow pants and parkas with the hoods up, lthey would knock each other down and flail around, dark and nylon shiny against the snow.  They looked like biped seals to me, not human.  Lying there in the snow despairing because these wild subhumans destroyed my snow fort, I knew who I was–I was not like them.

Years and years after this bleak day, I would meet the artist and Zen Buddhist Frederick Franck, who told me people are born hominids.  Special efforts have to be made to become fully human. I was shocked when he said this. What kind of Buddhist said such a thing?  Didn’t Buddhists believe we all have Buddha nature?  And hadn’t Franck had worked with the great Christian Albert Schweitzer in Africa? But Franck had also witnessed some of the ravages of World War I.  He knew a bit about inhumanity, and it informed what his appreciation for the humanizing power of seeing:

“Astonishing. Getting older and older, I still stand here at this window, watching as if never having watched anything like it before – the wrens, juncos, and purple finches picking the seeds strewn on the pile of frozen snow,” he writes in the 1995 “Stranger” issue of Parabola. “I am aware that what I am seeing is no more, no less than the great Mystery, that of being here at all, that of seeing it….”

I wish to have more of these moments of really seeing. I aspire to being fully human. But remembering Johnny and Joey, the boys who lived next door, I realize this view is a sharp and dangerous sword.  One moment, it helps you see and aspire, the next it’s a weapon of judgement, of separation from others.  The change happens in a flash.  Inhaling, you’re a sincere seeker on a path.  Exhaling, you’ve contracted into ego, defending yourself against the hominids.

I was not like Johnny and Joey, the boys who lived next door. I knew that on that grim winter day when I was about ten.  My sense of identity sprang up from a keen and certain sense of contrast—and it still does, in a heartbeat.  They were definitely missing something.  I was on the side of qualities and aspirations that were larger and better than anything they would ever know.  This is who I was: I was not like them.

True, I had spent hours digging a tunnel through the towering snow banks that ran the length of the driveway.  As I burrowed, I imagined a daring prison escape.  In these escape narratives, I was always innocent and noble like the Count of Monte Cristo, although I didn’t yet know that story.  Like the Count, I had the sense that I was secretly educated while in prison, secretly given a treasure and made capable of swashbuckling deeds. But just as I was relishing the hush and the blue light inside the burrow, just as I was savoring my sense of being safely hidden and full of secret potential—smash!  Johnny and Joey dove into it.

I remember the shock of being suddenly being exposed, looking up at bruise colored sky,  feeling stranded and bereft. I felt very, very sorry for myself, having just these wild, wrestling hominids for company.  Up surged a very passionate sense of self…founded on the certainty that I was not like them.   It was as if I had extra organs or lobes or neuronal connections that they didn’t have.

We hominids tend to contract into a sense of identity–including a sense of our finer humanity–when our snow forts get smashed. There is an impulse in every healthy person to affirm themselves, to push on, to overcome some obstacle, to win,to make a stand.  Without this impulse we couldn’t live, or not well.  But lately, I’ve found it hard not to notice the negative nature of ego.  It weighs and judges everything in the world in terms of itself–everything is defined in terms of what is pleasant, unpleasant, or neutral.  In the midst of a shock—even in a tiny one–we can see how it works.   When reality challenges us, we tend to tend to contract, to close the gates.  Just like single celled beings, we scramble to defend our borders, align our selves with order against disorder, affirm to ourselves that we are differend and better than that (whatever that happens to be, and it changes all the time).

One way out that I know of is by intentionally paying attention.  The act of seeing, as the late Frederick Franck knew, is a way of knowing that we are meant to be more than habitual creatures.  Coming to this act takes a very great deal. Franck also knew this, even if he didn’t say it.  We need help beyond our own experience.  We need sages and saints and centuries of experience.  We need ideas beyond us.  But seeing is a start.

Here is another quote from a past Parabola (now available in our online store): “There are times in our lives when we come back to simply being here in the moment: it is inherently good and wholesome to let ourselves just be. Without the conceptual filter of “me,” the environment is nourishing, because we let it touch us rather than try to control or manipulate it. We can have a gentle relationship with our surroundings–as when sitting in a park on a sunny day with the breeze catching the leaves of the birch trees, the children playing by the lake, and the bikers going by.

When we are fully present, we are receptive to phenomenal world around us. Opening to sense perceptions, we become a sensate being, embodied. Being fully present, when we look, we actually see; when we listen, we hear; when we smell and taste, we savor it; when we touch, we truly feel. Connecting to the phenomenal world in this way is the key to contacting reality directly, beyond concept. We are able to experience the play of energies that is life itself.”

–Irini Rockwell, EMBODYING WISDOM: Chögyam Trungpa Rinpoche’s approach to the five wisdom energies, accompanied by his teaching on the sense and emotions, PARABOLA, Volume 31, No. 1, Spring 2006: “Coming to Our Senses.”

5 thoughts on “How to be Human”