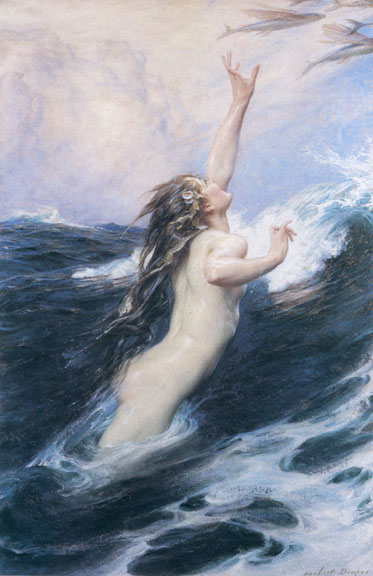 Parabola’s new “Power” issue is printed and making its way to stores and mailboxes, so power is literally in the air.   Lately, I’ve been thinking about the power of seeing things as they really are–those moments when we give up the drive to be in control or to be this or that and just let ourselves see what we really are.  A new energy, a new question, a new interest can appear then…even if we don’t know it at the time.

These opportunities to see our real situation come up all the time—it just takes a while to learn to value them.  I remember having a glimpse as a child, while pretending to be a jungle girl in a vast primordial jungle.  I always wore a certain pair of navy blue cotton shorts when I was being a jungle girl. Partly this was to have my legs bare and free the way they would be if I was in a jungle, the better to crawl over and around the furniture and hide behind the rubber plant.  But also it was the radical simplicity, even the poverty, of the outfit.  It marked me as different from the people around me, capable of different and more interesting things.

In a long-ago issue of Parabola, educator Richard Lewis described the “heroic way” children see deeply into things, using their senses and imaginations to experience the world, not as a collection of external objects, but as living beings full of surprising possibilities, all of them dwelling in intimate connection with us. Lewis cautioned adult readers not to push children to lose this fluid way of being with life.

But children also tackle difficult subjects and play out high stakes dramas.  Children flow from simply being with life in all its animate, magical glory to wanting to live a different and greater life—to prove they are someone special, someone capable of great things.   Striker, the imaginary black panther who padded along beside me when I played the jungle game, was more than a glamorous and dangerous friend.  He represented a life that was wild and deep and powerful—connected shaman-like to the beating heart of creation.   Like most children, I believed I was secretly capable of magic.

One cold winter night, I was called to dinner.  “One day those shorts are going to disappear,” said my mother.  “It makes me cold just looking at you. At least go put on slippers.”  I slid into my seat at the table to see that there would not be the solace of spaghetti, my favorite dish, but the worst thing in the world. In those days I could eat meat only if it didn’t have bones or in any way resemble the animal it came from, and fish had the smallest bones. The shape and tiny bones undid me.  I just could not eat it.  Eat your fish, I was told.  But I looked down at it, disappearing into myself the way children can, certain that I was born in the wrong family, that I was a different kind of being.

Years later, in the course of writing a story, a famous ghost hunter who also claimed to have psychic powers told me that she could see in the atmosphere around me that my mother and father ran a very tight ship.   I visited my childhood home this past weekend and was amazed to see that it actually resembles a ship inside—there are mahogany closets with sliding doors and chests of drawers built into the walls.  It is a cozy brick house (not rambling like the haunted house my parents would inexplicably move us to) but it has serious built in storage capacity and electrical outlets every foot or so and enormous windows everywhere.  It is a house built to be neat and clean and fully illuminated at all times.  It s the opposite of a jungle.

How can you be a jungle girl and not eat fish, my father wanted to know.  A jungle person has to catch fish and clean it and cook it over a fire.  There was challenge in his eyes.  My father knew how to do all those things and more.  He had a boat and he could fish.  He had been in a real jungle during World War II.  But although I didn’t register what it was at the time, there was a flash of something else in his eyes, as if my way of being, climbing around on the furniture, talking to invisible predators, was challenging him, as if  I was rehearsing for a life he couldn’t see and would never want, something messy and dangerous.

But the few times I had gone fishing with my father I didn’t even have the heart to bait my hook.  As he pierced the worm with the hook, I wondered how people could do such things.   Sitting at the table that winter night, I was flooded with a sense of contradiction or opposition.  How could my head be in a lush and florid jungle while my actual body was so timid, shivering and shuddering at the sight of fish?  I was two pieces, two beings, and more because somehow I also sensed or knew there was more to life beyond this cozy house, this fortress against fear.

I can be brave, I shouted. I didn’t know how to value what I glimpsed.  I wanted to shout it down, but I had sensed the wild freedom in it.  I was seeing a truth beyond thinking.  Just eat a bite honey, my mother coaxed. She wanted peace and order.  I didn’t blame her.  But I just could not do it. My father ordered me to sit there until I ate the fish.   Everyone left the table, and I sat there with my head bowed over the tiny, increasingly cold fish body, feeling horribly oppressed and confused. Who was I anyway?  Why did I have this sense I could have a bigger life?

Finally, I stood up and lobbed the fish down the basement stairs.  It felt like a moment of wild freedom, a moment of striking out for adventure.  Unfortunately, the fish went flying just as my father was walking up the stairs, and it hit him smack in the shin.  He was stunned. I was stunned.  There it was again, the gap between the dreaming and the doing. What I did seems paltry now, not the great bold act of rebellion it felt like at the table.

Well you can’t make her eat it now, said my mother, who drifted into the kitchen as the scene unfolded.  She fought back a smile.  My father looked confounded.

Many years later, I read The Hunger Artist by Franz Kafka.  It features a man who starves for a living, expressing his terrible will by doing without.   In the end, people grow bored with his act of refusal, walking right past the cage where he lives until he dies unnoticed. They buried the hunger artist along with the straw.

“But in his cage they put a young panther.  Even for a person with the dullest mind it was clearly refreshing to see this wild animal throwing itself around in this cage…This noble body, equipped with everything necessary, almost to the point of bursting, also appeared to carry freedom around with it. ”

This is exactly what I wanted to do, I realized. I wanted to learn to be like my beautiful panther Striker, unified, in harmony with everything, carrying my freedom with me.