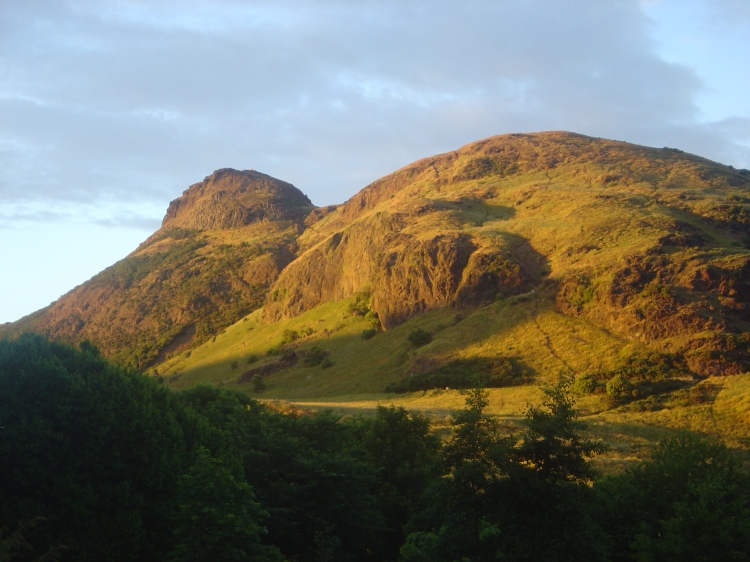 “You would run for your life,” said my daughter Alex. “You would grab a few precious objects and run.” One rare balmy day in late March, we travelled by train from London to Scotland.  The sun was glinting on the North Sea and we were imagining what it would be like to see Viking ships on the horizon–a daughter studying abroad, her life open and shining before her and a mother, freshly bereaved from the death of her father months before and the moving away of her daughter to graduate school, to a happy relationship, and to England, the country of her dreams.  My future was also open, but like a villager or a monastic scanning the horizon for sails.

My daughter arranged the train trip, understanding Scotland is bathed in a mythic glow for me, the unseen land of my paternal ancestors.  America is a land of immigrants.  Everyone–even Native Americans whose distant ancestors walked to America across the Bering Straits–came here from somewhere else.  Most of us (maybe especially the Indians, whom European-Americans brutally displaced from their adopted lands) feel a certain loneliness, a longing to find our true home.  Many of my British and American friends are surprised but struck by this, how lonely, displaced, restlessly pining America feels.

Growing up in the suburbs of New York, my daughter used to marvel that kids she knew identified with their “Old World” roots, proudly proclaiming their Italian and Irish t shirts.  “Maybe you should where a t shirt that says ‘Other,'” said her aunt. She is made up of so many diverse strains–Scottish, English, Maltese, Polish, Danish, a dash of Dutch–she claimed she couldn’t identify with anything other than American.  Yet ever since she read Harry Potter and the Lord of the Rings Trilogy, Britain–and what C.S. Lewis called “Northerness,” became her true spiritual home.

Growing up in the north of England with a Scottish mother, thoroughly separating the landscape from the characters he regularly encounters there, Alex’s boyfriend Anthony was startled to hear bagpipes leading the procession in my daughter’s college graduation.  “It’s a tradition here,” explained my sister-in-law, a professor at the college.  But why? He recognized the song, he said.  But what was it doing here? Honoring roots, I explained. He would hear a battalian of bagpipes at any police or fire fighter’s funeral in New York City, and many other grave and august events across the land.   Anthony looked bewildered.

Completely unknown to me, Scotland represented a set of essence qualities I secretly aspired to possess.  “Any captain in any army is glad to have a farm boy as a soldier,” my father told me.  “A farm boy knows how to do practical things, build a shelter, hunt, find true north.”     The Scots I am descended from tilled the rocky fields of early America, sailed ships up the St. Lawrence River to the Great Lakes, fought in the American Revolution.  Secretly, I long to be like them, hearty and brave and capable of enduring great hardships. My own father was much more realistic about what they were probably really like, roaring with laughter to think they landed in America before the Revolution, free white men with a vast continent before them, and a special stubborn talent for staying poor.

“Actually, you’re part oppressed and part oppressor,” said my daughter, looking out the train window at the North Sea.  Edinburgh, our destination, parallels Denmark, the homeland of both my mother’s parents.  My mother’s mother’s family can be traced bacy Danish lord who established a vast estate in the 11th Century.  When I first learned this, inheriting a leather-bound family geneolgy on my mother’s death, every suspectible, excitable Amercian cell in my body danced: here were roots!

“That lord was definitely a Viking,” said Alex, who is England studying medieval history and literature, reminded me.  “In  that period in Denmark that was how you amassed a large estate.”  I tried referring to myself as “Tracy the Terrible” and to her as “Alex the Awful,” but Alex cautioned me that Viking raids were no joke to my Scottish, Welsh, and English ancestors.

All humans carry the DNA of ancestors  who travelled a long way from where they started, who were pushed from their lands by force or by scarcity or yearning for something they couldn’t find, all humans are made up of oppressor and oppressed.  I thought of this while I was standing in a check out line  in tourist shop in the old part of Edinburgh, buying a little booklet about the Cochrane clan.  “Well, hello Mrs. Cochrane!” said the hail man behind the counter. I realized he probably greeted New World tourists like this all day long.  Alex flipped through the booklet and quickly discovered the Cochrane Clan (my grandfather dropped the “e”) was founded by a Norseman.  “Congratulations, you’re Viking on both sides,” she said.  And guess what?  An early member of your supposed clan invented an early weapon of mass destruction, nerve gas, and also the smoke screen.

The next day, Alex and I climbed to the top of Arthur’s Seat, the main peak in a group of hills surrounding Edinburgh, so named because it is claimed to be the location of King Arthur’s Round Table (not likely, according to Alex). “Do you feel anything?”  Alex asked as we climbed, and I told her I did.  At first, I felt a pang of loss.  I wouldn’t be telling my father about this trip.  My father was gone and my mother was gone, and my daughter had grown up and gone off on her own quest to a distant land.

Alex and I discovered there is a steep way up to Arthur’s Seat and an easier, pastoral way, following winding lanes.  Accidently, I chose the more arduous climb. “This perfectly describes the difference between our lives, said Alex as we trudged along, using our hands to climb at times.  Some people just have to learn things the hard way.   Yet I felt my heart lift as we climbed. My attention opened to receive–not just the craggy, spectacular beauty around us but also the experience of being in a body, alive on the earth.

At the summit, Alex and I sat and listened to wind and the human sound of the climbers all around us (“What a view!” “It would be much more dramatic if you fell off,” said a boy with an unmistakable American accent).  As I sat with my daughter, I had the sense of taking off armor, putting down my burdens, ending a quest.  This is what I really wanted,I realized, not some new and deeper identity, not some Scottish feeling or Viking feeling but a  chance to go beyond all my memories and imaginings and conceptions, to take a seat.

Alex explained that if there was any truth in the legend of Arthur, he wasn’t a knight in shining armor or a king in a grand castle, but a much earlier kind of warrior chief, living a life that was much more simple and elemental.  I sat and listened, my grief and longing stilled. I pictured Arthur sitting quietly, open to the elements, sensing a connection to something deep and essential.