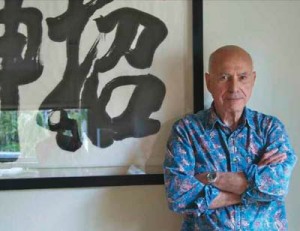 It sounds like child’s play.  In a very interesting interview in “Alone and Together,” the shiny new issue of Parabola, the actor Alan Arkin describes starting workshops by telling participants not to do anything interesting or creative.  Instead, they play with an imaginary ball or something similar, and soon people start being…creative.

“When we leave ourselves alone, when we’re flowing like we’re supposed to flow, without getting in our way and censoring ourselves and trying to please our parents or some teacher or some idea of who we would like ourselves to be,” says Arkin, “we automatically go into creative mode.”

Creativity is our true nature.  But we do get in our own way.   Over the years, we pick up ideas and biases and conditioning.  We use ideas to arm ourselves against life—defending ourselves against the unknown (in Arkin’s terms) with “Saturday Night Live, smart-ass stuff.”  Most of us have to live a bit before we can shift from grasping an idea to holding an intention.   Being really willing to be open to receive and to serve life can take living through a failure or two.

When I was in high school, I had a boyfriend who liked to wear only wore black, including a long black leather trench coat.  He liked to draw very pen and ink drawings of dead ravens.   He made delicate trees out of blown glass—which he would dramatically smash them from time to time.  These days, I’m sure he would be called Goth.  It is also clear to me that he (and probably many contemporary Goths) was living at a considerable distance from his own body, his own life.

This boyfriend’s father was a doctor, and along with a consortium of other doctors he owned a sizable tract of the Adirondacks and a big lodge.  This boy of cultivated darkness and smart-ass remarks would go there to indulge in rare pastimes like falconry.  (Even at the time, I found that over the top.)  He also liked to go there alone in the winter because–as he once told me in a dramatically hushed voice—“ the cold cauterized all sorrow.”   Towards the end of our bleak little relationship, he told me he plagiarized that phrase and that thought.

I found the admission deeply shocking, proof that I made the right decision in ending the relationship. And yet I’ve come to see that in a sense we are all plagiarists most of the time—a bundle of borrowed ideas and phrases.  My friend was in flight from real feeling.  The wish to feel intense cauterizing cold—all the intense risks that certain kinds of adolescents take—it was a reaction to the numbness that comes from living at a distance from life.  For all the talk of ultimate subjects we did in those days(discussed by the light of dripping skull candles) death didn’t mean anything—and life didn’t yet mean anything.  Being in a body in life was a terrifying prospect we hadn’t really explored.   And yet, most of us are like this, most of the time.

Yet slowly, I am learning to appreciate that we need to show up for life in a direct and simple way to have certain realizations: we find true equanimity in the midst of unquiet life, we find compassion as we suffer. There is a kind of alchemy that can happen only when we put aside all our ideas and agree to be deeply in our bodies and our lives, like children.   I’m convinced this takes certain grounding experiences.  Here J.K. Rowling addresses a Harvard graduating class on the value of failure:

“Ultimately, we all have to decide for ourselves what constitutes failure. But the world is quite eager to give you a set of criteria if you let it. Failure means a stripping away of the inessential. I stopped pretending to myself to be anything other than what I was, and began to direct all my energy into finishing the only work that mattered to me. Had I really succeeded at anything else, I might never have found the determination to succeed in the one arena where I believe I truly belonged.  Rock bottom became the solid foundation on which I built my life.”